An island paradise for snorkelling

Thickly forested and fringed by golden sandy beaches, Cooper Island is one of the Little Sisters group, lying to the south of Tortola, a popular stopover for snorkelling and home to the Cooper Island Beach Resort.

One of the smallest of the British Virgin Islands, Cooper Island is easily accessible for those touring the area on a private yacht charter, with mooring balls for 30 vessels of up to 18m in length available in Manchioneel Bay, at the northern tip of the island. It’s a popular destination so it’s advisable to get here before midday to claim your spot.

There are five private properties dotted around the island, while overlooking Manchioneel Bay is Cooper Island Beach Resort, which offers an excellent restaurant and rum bar open to day visitors, in addition to the ten beachfront guest rooms.

Owned and operated by the Harris family, Cooper Island Beach Resort is an eco-friendly venue which has its own solar-powered and water-efficient microbrewery, producing a range of beers and lager, and a coffee bar with tiered outdoor seating offering striking views over the Sir Francis Drake Channel.

No reservations are needed for lunch, although it’s best to arrive early to be sure of a table, with a menu featuring typical light Caribbean dishes such as conch fritters, tuna salad and West Indian chicken roti. Book ahead if you want to stay for dinner, which includes a selection of Caribbean curries, jerk chicken and grilled mahi mahi.

Cooper Island makes a convenient stopover for those on their way to visit The Baths National Park on Virgin Gorda, while it’s a popular destination in its own right for snorkelers and a great place for kayaking along the coast.

Off Cistern Point, at the western end of Manchioneel Bay, you can see a variety of soft corals and teeming marine life including turtles, tarpon, parrot fish and eagle rays, while on Chromis Reef you will encounter numerous blue chromis fish and squirrelfish, while more experienced divers can discover the wreck of a twin-seat aeroplane, lying at a depth of 10m.

Wreck Alley, one of the most popular diving sites in the British Virgin Islands, lies off the southwest coast of Cooper Island. Trained scuba divers will enjoy exploring the wrecks of four small vessels, deliberately sunk here to provide an artificial reef, at depths of between 23m and 28m. Visibility is good, and the wrecks provide a habitat for a rich variety of sea life such as sponges, corals, moray eels, groupers and stingrays.

Begin your own discovery of this inviting little island by viewing and comparing all superyachts for charter in the Virgin Islands.

Explore Other areas within the British Virgin Islands 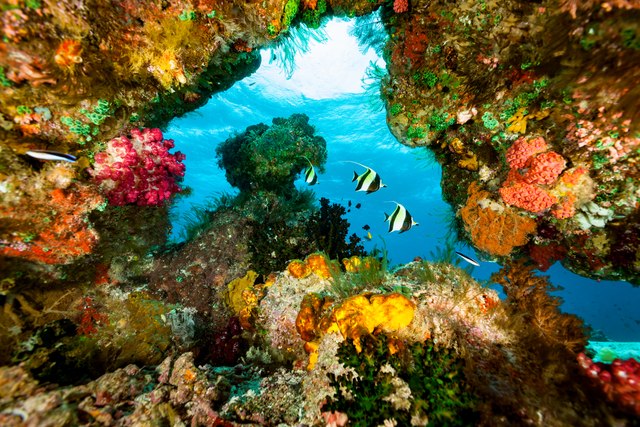 The best wreck dive in the British Virgin Islands

This is a small selection of the global luxury yacht charter fleet, with 2998 motor yachts, sail yachts, explorer yachts and catamarans to choose from including superyachts and megayachts, the world is your oyster. Why search for your ideal yacht charter vacation anywhere else?

This is a small selection of the global luxury yacht charter fleet, with 2998 motor yachts, sail yachts, explorer yachts and catamarans to choose from including superyachts and megayachts, the world is your oyster. Why search for your ideal yacht charter vacation anywhere else?